Louisville's own Voce Novae (VN), a unique, semi-professional ensemble was founded in 1993 by Frank A. Heller, III.   Now in its 28th season, the ensemble is composed of selectively auditioned singers from the Louisville and Southern Indiana metropolitan area.

A community uplifting the human spirit by performing the finest in choral literature.  We are dedicated to awakening the highest musical artistry, providing a camaraderie that nurtures our members’ musical and personal development, and delivering a gift to our audience that evokes the spirit with which we embrace our music.

In past years, Voces Novae has partnered with composers Andrew Maxfield and Harry Pickens to celebrate the beautiful poetry of Kentucky’s own Wendell Berry.  Voces Novae has also collaborated with the Louisville Orchestra on multiple works including Beethoven’s Ninth Symphony, Carmina Burana, Mahler’s Resurrection Symphony. and Samson and Delilah.  The ensemble has also been a featured performer for the Berry  Center, the National Association of Pastoral Musicians, the Jewish Music Festival and the Concert Series of the Madison (Indiana) Performing Arts Foundation. Voces Novae is regularly included in the Business First magazine as one of Louisville’s top 20 Largest Performing Arts Organizations.

Voces Novae’s regular season includes three subscription concert performances. Our repertoire includes a focus on a capella and contemporary American music; however, we consistently perform an eclectic array of works ranging from early chant to European classical to living modern composers.  We hope you will consider joining us this season not only to celebrate our current season, but to experience music on a personal level. Come feel the music! 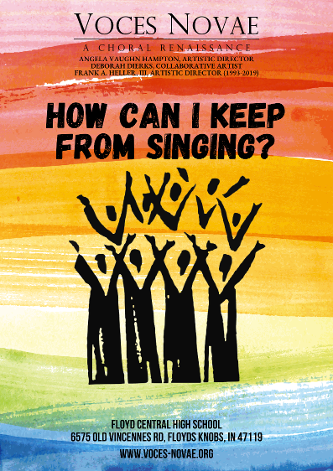